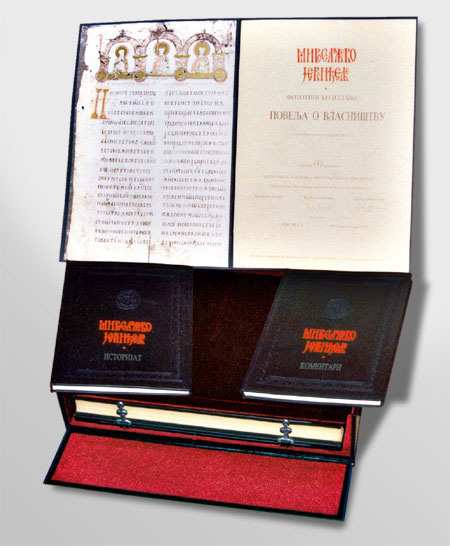 This FACSIMILE EDITION is the first real and thorough replica of the oldest Serbian book  Miroslav's Gospel - written in Cyrillic in the last quarter of the XII century. The press of the facsimiles and additional books was finalized on Vidovdan, June 28, in Johannesburg, South Africa, and the entire project is the result of seven years of hard work of a distinctive team of international experts: editors, historians, Byzantine scholars, preservers, technologists, press and graphic experts, artists, artisans and craftsmen.

Immediately after the print release, a number of the most significant national and university libraries bought the complete set of MIROSLAVS GOSPEL  FACSIMILE EDITION, and some of them, among others, are:

The Library of Congress, The British Library, The Berlin-Brandenburg Academy of Art, Goethes Institute in Munich, The Austrian National Library, the Library in Alexandria

The set consists of: